The Sonic Tube Map is a project initially conceived by myself, Carina Levitan, and Sam Andrews during a Max MSP class at the London College of Communication. The three of us discussed designing a program that would allow users to create their own unique sonic journey through London using the London Underground map as an interface and brainstormed a number of ways in which to implement this including recording the ambience of each underground station.

When I began developing the project independently in the spring of 2009, I realised that the sound of the different stations themselves did not differ enough to properly explore how the diversity of the city manifests itself sonically.

The London Underground map proved an ideal interface to use due to its simplicity and iconic nature. To begin, the user simply clicks 'Start' followed by the circles next to the stations on their chosen route. After the route has been decided, the 'End' button is clicked; the journey begins, with each station on route offering a sonic snapshot of the area, intertwined with tube train recordings simulating the journey. 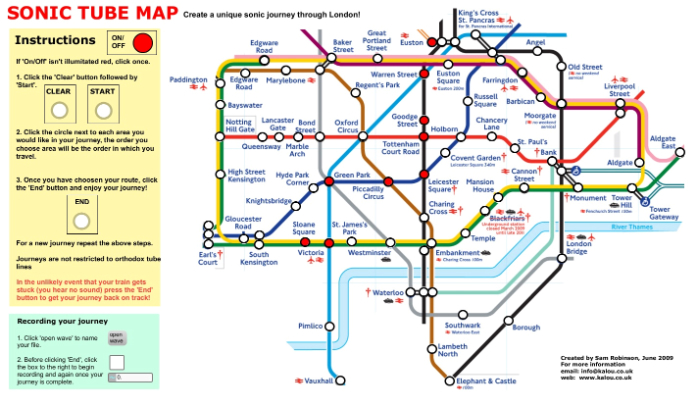 I visited each of the 62 zone 1 Underground stations and their surrounding areas, recording what I heard (the criteria for which is below). I cut the recording into smaller segments (13 seconds) and using Max MSP, mapped each station giving it its own unique sound file. I also made a number of recordings on tube trains. These 10 short files (7 seconds) are randomised during the journey.

An automatic 1 second fade was programmed on Max for the beginning and end of each file, so every station sound would smoothly transition into a tube train recording and so on, creating a continuous sound-piece.

The criteria for my recordings were varied. I made recordings that I thought were a good representation of the primary focus of the area. For example the 'Changing of the guard' was used for Green Park, which is next to Buckingham Palace. Some recordings were chosen because I deemed them the prominent distinctive sound in the area, for example Big Ben's tolls in Westminster. Others were chosen because I either believed they represented the general ambience of the area (Warren Street's traffic on Euston Road), was an interesting found sound (squeaking bridge at Embankment), or for pure artistic reasons ('Silent' crowded lift at Russell Square).

I do not claim that all the recordings accurately represent the ambience of the area, above all they are my personal choices. Below are the notes I took while recording, some of which were written before I decided to focus solely on zone 1 stations.

Below is a compete list of the recordings used for each station. Click for a larger image. 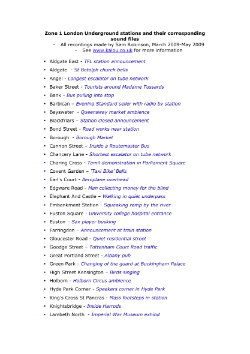 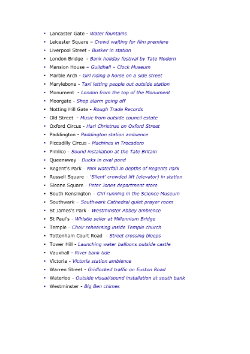 A few examples of the journeys I have made using the record function can be found below. Routes are not limited to orthodox tube underground lines so, for example, I could create a journey that stops at Gloucester Road followed by Liverpool Street and then to Vauxhall.

These journeys are best listened to using headphones, as the listener will have the full benefit of the binaural recordings.

I'd like to see as many people as possible help to develop this project. The contribution of others could build a world-wide network of sonic transport maps, and provide an insight into the diverse sounds of the world's cities. Ideas for development I've had include:

If you are interested in developing the idea and need some assistance please e-mail me at sam@kalou.co.uk.

Thank you to Aquiles Pantaleao, Allyson Stephens, Carina Levitan and Sam Andrews for their help in developing and sustaining this project.